Catch brand-new and returning HBO Originals “The Many Saints of Newark”, “Gossip Girl” and “Folklore”, with great superhero action in “Wonder Woman 1984”, all on HBO GO

Immerse yourself in the tumultuous era of 1960s New York in HBO Original The Many Saints of Newark, which laid the foundations for the award-winning series The Sopranos, and get a look at Asia’s most spine-chilling tales in HBO Asia Original Folklore Season 2. For a glimpse into the complications of modern relationships affected by peer pressure, social media and more, don’t miss brand-new episodes in Gossip Girl Season 1.

The Many Saints of Newark (HBO Original Movie)

Revisit the exciting world of award-winning HBO drama series The Sopranos in this movie prequel. Set in the midst of the Newark riots, it follows the lives of gang members from African American and Italian communities. Often at each other’s throats, their dangerous rivalries quickly turn lethal. These are the circumstances that shaped young Anthony Soprano and set him on his path. Look out for several beloved characters from the original series that inspired the film, and catch all six seasons of The Sopranos on HBO GO, one of the most influential television drama series of all time and recipient of 21 Primetime Emmy Awards, five Golden Globe Awards, and two Peabody Awards, among others. Stars Alessandro Nivola, Leslie Odom Jr., and Jon Bernthal. 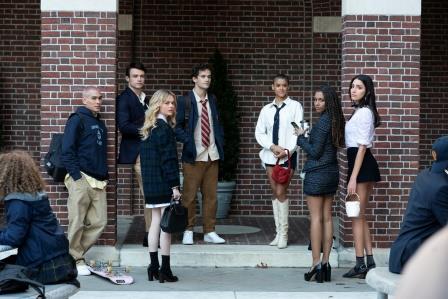 Part 2 of Season 1 premieres in November on HBO GO

The remaining six episodes of season one premiere this month, with more insights into the lives of young New Yorkers from the Upper East Side, their privileged existence and their social lives. Developed by showrunner Joshua Safran, a writer and executive producer on the original series, it continues its social surveillance nine years after the original blogger’s website went dark. You can also catch all six seasons of the original 2007 Gossip Girl series on HBO GO. Stars Jordan Alexander, Eli Brown and Thomas Doherty.

Superheroes in Action on Warner TV and HBO GO

Barry Allen may have married the love of his life but they are far from their ‘happily ever after’ as The Flash Season 8 delivers a whole new set of problems. Plus, don’t miss Wonder Woman 1984, now available on HBO GO following a limited theatrical release in 2020. In this sequel, Diana Prince @ Wonder Woman faces off against the forces of evil, now embodied in two new villains.

The Flash is back for a new season and new challenges as well. After dispatching the villain Godspeed in Season 7, Barry Allen @ The Flash has a lot to get used to, starting with his children from the future who choose to remain in his current time, and the unknown whereabouts of his archenemy, Reverse-Flash. The new season will kick off with a five-episode crossover event, Armageddon, and fans can also binge-watch seasons 1-6 on HBO GO. Stars Grant Gustin, Candice Patton, Danielle Panabaker, Jesse L. Martin, Carmen Moore, Tony Curran, and Tom Cavanagh.

Sometimes, bonds are forged between the most unexpected people. In The Red Sleeve, a young royal must choose between his heart and his duty, and an aging musician seeking redemption finds a glimmer of hope in an ambitious young man in The Space Between.

Named for the red sleeves worn by court ladies, identifying them as the King’s women, this tale depicts a bittersweet royal court romance between the King of Joseon, whose priority is the nation over love, and court lady Sung Deok Im, a free-spirited young woman who wishes to live her own life. Stars Lee Joon Ho, Lee Se Young, and Kang Hoon.

An unlikely relationship forms when Micky Adams, an eccentric has-been rock musician, meets ambitious young Charlie Porter. While Micky’s record label is looking to drop him, he realizes Charlie could be the key to an artistic breakthrough. However, Charlie has been tasked with forcing Micky out of his contract. Despite their opposing goals, the pair’s unlikely friendship grows and helps both gain perspective on the music industry, life, and love. Stars Kelsey Grammer and Jackson White.

Catch Ekans, a brand-new animated series featuring a young hero with snake-like abilities who uses his powers to protect humankind. It’s also a great time to take a load off and have a good laugh with The Tom and Jerry Show and The Carbonaro Effect: Inside Carbonaro.

The Tom and Jerry Show

Premieres on Saturday, November 6 at 6pm on Boomerang (Astro Ch 619). New episodes premiere every weekend at the same time. (Heaps of Tom and Jerry is also available on HBO GO)

The iconic Tom and Jerry return with fresh shenanigans and crazy capers as they continue to pit their wits against each other! Get your fill of more cat-and-mouse action with brand-new episodes and scenarios that will present them both with a fresh set of challenges and new settings in fantastical worlds. Among them, Tom will need to recapture wild animals, save King Arthur’s kingdom, and fend off a persistent penguin named Tux!

Meet Ekans, a 13-year-old boy with a heart of gold and a fearless attitude. He is chosen as ‘The One’ and granted extraordinary powers by a group of powerful snakes, in return for keeping humanity safe. Their gift to him, the Naagmani, enables him to harness serpent-like power and heightened sensory perceptions including camouflage, flexibility and strength. These qualities make him the perfect hero!