Roald Dahl’s The Witches, lovingly reimagined for the screen, brings us the kind-hearted Hero Boy in his quest to overcome diabolical witches, with help and support from Grandma and some friendly mice! The movie will debut in Malaysia exclusively on HBO GO and On Demand on Astro on Friday, 29 January for fans to enjoy from the comfort of their own homes.

Here’s a behind-the-scenes look at what it took to create this visual movie masterpiece!

The movie takes viewers back to the simpler times of 1960s, long before the intrusive presence of handphones and other digital gadgets. While the location was moved from its original European setting to Alabama in the US, the nostalgic tone of the book was achieved with the beautiful floral prints on Grandma’s dresses, kitchenware sourced almost entirely from the Southern United States and the corner store with its comprehensive inventory of authentic foods and household items, including 300 period torches from a private collector. They were so successful that Octavia Spencer aka Grandma said it reminded her of her own grandma’s home!

The antebellum style with its bold Southern grandeur was heavily featured in the Grand Orleans Imperial Island Hotel where most of the story unfolds, with huge pillars, large balconies, dormers and gables. For the Grand High Witch’s bedroom suite, the lavish spread of pink damask, gilded mirrors and oversized wall lights evoked the rich feel of European royalty. 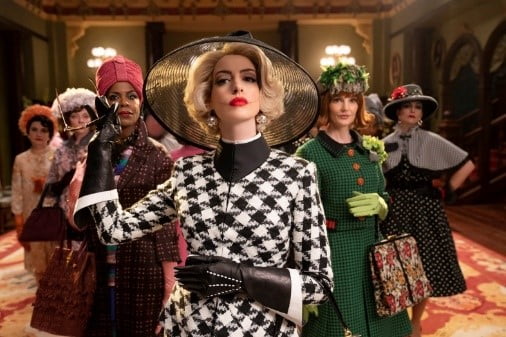 Well-dressed and glamorous, the witches are a sight to behold, with not a single wart in sight. Naturally, Anne Hathaway in the role of the Grand High Witch leads the pack with her beehive hair, heavy eye makeup and bold red lips. Her look pays tribute to the fashion icons of the 1960s, from Jackie O to Marilyn Monroe and Swedish-German supermodel Nena von Schlebrügge.

Similarly, the rest of the witches are styled with elegant gloves, perfectly matched outfits and smart shoes with perfectly coifed hair. It’s only thanks to one little boy and his loving grandma that we now know what those glamourous wardrobes hide!

Claws for fingers, toeless feet, hair of unrealistic proportions… to achieve all these dramatic looks, movie-makers had to call in the experts! A prosthetics team was responsible for creating and curating a range of looks and outfits to suit the escalation of the Grand High Witch’s evil plan. A total of six different looks were created just for Hathaway’s character, which included 17 bald caps, 22 pairs of “back of hands,” 198 finger extensions and eight pairs of feet. And that’s just for her! To complete the look for all 50 witches, the final count came up to 62 bald caps, 20 pairs of feet, 80 back of hand prosthetics and 350 finger extensions!

Fun Fact: The finger extensions kept sliding off the actors’ fingers during production, with some of them appearing in the most unusual places!

In his books, Roald Dahl often draws parallels between a person’s inner and outer beauty, and it’s no surprise that this is also true in the portrayal of witches. While they all look strikingly beautiful, they hide darkness within and to reflect the darkness and evil of the Grand High Witch, her initially glamourous look gradually gets darker and darker. Even her wig, thanks to some extreme back-combing, gives the appearance of horns when viewed from the side! As Grandma says, “Evil. There’s no other way to describe them. Pure, unvarnished evil. That’s what witches are.”

Fun Fact: Anne Hathaway, who plays the Grand High Witch, grew up reading Roald Dahl books and loves how he respects the way children feel. Well, she’s played her role so well that children are sure to feel absolutely terrified!

Kristin Chenoweth, who played the mouse Daisy, was locked down in New York City while shooting was in progress. Since she couldn’t be on set, her boyfriend took matters into his own hands and transformed her closet into a studio, with her computer, tablet and handphone connecting her to the director, producers and animators so they could discuss her character and how she would bring Daisy to life, so that the animators could draw it in.

Originally, the Grand High Witch was supposed to have a Scandinavian accent but Hathaway found it really difficult to create an intimidating presence with its light, musical quality. Instead, she went further back and discovered Old Norse, which hit the right notes when it came to sounding big, scary and dramatic. Even her fellow actors enjoyed it, with Stanley Tucci finding it extremely entertaining.

#8. Best Buddies, On-Screen and Off

Unlike what witches think – that all kids deserve to be turned into mice and exterminated – Jahzir Bruno and Codie Lei Eastick demonstrated the best of childhood qualities by becoming fast friends! Apart from attending lessons together, they also hung out in the evenings after each day’s shoot concluded.

Download the HBO GO app from App Store or Play Store on your device or access HBO GO via Astro or at https://www.hbogoasia.my/. HBO GO is available on Android TV, Apple TV, LG TV, Samsung Smart TV – and comes with AirPlay and Google Cast functionality.

Astro On Demand is available to all customers via the Ultra box or the Astro GO app. Additionally, Astro Movie Pack customers can enjoy HBO Go access at no additional charge.

Squid Game Is a Fresh Take on The Survival Genre. We’ll Tell You Why!