In his newest Dolce Vita series, David Rocco’s Dolce Southeast Asia, the celebrity chef travels throughout the tropical region to learn traditional recipes, sample legendary street food, and bring the stories of this rich region to life. The series premieres on 14 September at 10pm HKT/SIN (9pm BKK/JKT) on National Geographic.

Travelling across Cambodia, Malaysia, Singapore, Thailand, and Vietnam, Rocco explores a plethora of unique cultures, speaking with local artists, musicians, activists, hawkers and street food vendors along the way to better understand how they are uniting and empowering their communities with their art and cuisine.

These inspiring locations and conversations include the epicenter of Malaysia’s food scene and the locals who have found their life’s purpose in sharing love of food; Vietnamese families making their way back to their ancestral home, and Cambodian locals reconnecting their nation with its cultural past.

“Journeying with locals from all walks of life has allowed us a much deeper understanding of the distinctive flavours of each Southeast Asian country we visited. I’m thrilled to be a part of sharing the diversity this region has to offer the world, from its tantalising flavours to the majestic landmarks and sights, and most pointedly its rich and interesting history, culture and tapestry of uniquely personal stories,” said David Rocco.

Join Rocco as he discovers these tales of love, laughter, hardship, and determination found in every corner of region. Some of the stories Rocco uncovers this season include: 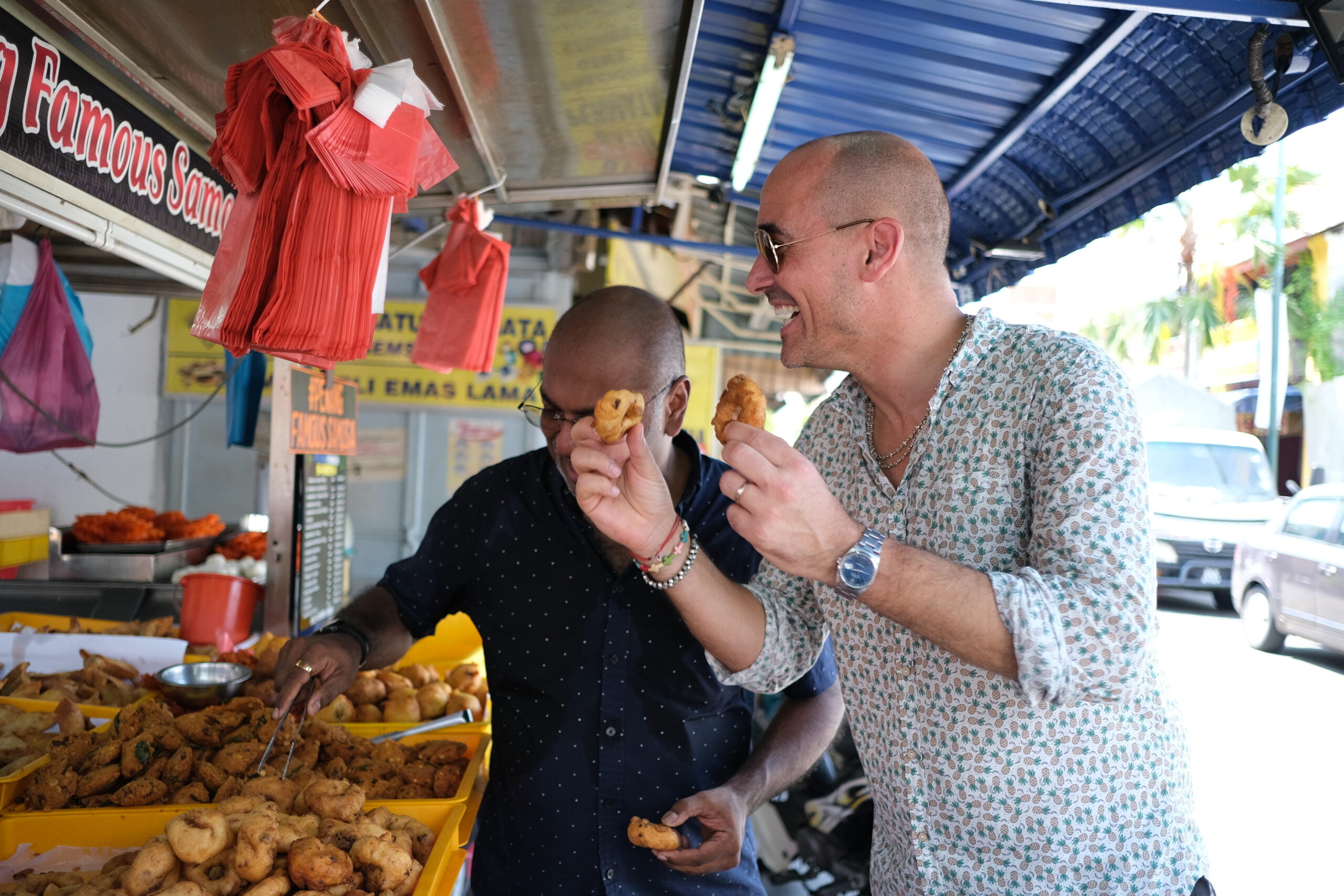 The series will air across Southeast Asia in Indonesia, Malaysia, Philippines, Singapore, Thailand and Vietnam.

Details of all 13 episodes are as follows:

After falling in love with the sights, smells and of course flavours of Southeast Asia in his many travels through the region, David Rocco has decided to see what this tropical wonderland has in store for him. Travelling to Vietnam, Cambodia, Thailand, Malaysia and Singapore, David learns traditional dishes and samples the street food he’s heard about from foodies all over the world. Seeing first-hand the unique cultures thriving in rural villages and the bustling cosmopolitan cities, David is inspired to share with the world the stories of the people he meets along the way.

Penang is the epicenter of Malaysia’s food scene. The coming together of Chinese, Malay, and Indian cultures, gives the food in Penang an identity of its own. David meets a few of the locals who share their love of food and how they have found their life’s purpose.

Georgetown, the capital city in the state of Penang, Malaysia, is a multicultural hub with an incredible food scene to match. One of the things that sets this city apart, is the thriving art scene. You can see evidence all around you, from street art, to open galleries to the culinary roadside arts. The artists in Georgetown are breaking new boundaries to inspire many through their work, creating a new energy and excitement for this island city.

David is in Kuala Lumpur, the capital city of Malaysia. KL has a long history of being the landing place for many different people – which has given itself a reputation of being a diverse and culturally open society with an incredible food scene. As with many regions around the world, Kuala Lumpur has seen a rise in the amount of refugees coming to the city, bringing with them many different perspectives and delicious cuisines.

After facing injustice and inequality, a small group of women came together to say enough is enough. Because of them, Malaysia is now taking the lead in Muslim nations ‘women’s rights’. Over a few delicious meals, David meets a few inspiring female activists who share their experiences with sexism and discrimination, and what it is like to live as a Muslim woman in Malaysia.

Everyone has their story. Creating a vision for your life is not easy, and is often scary. In Kuala Lumpur, David meets a few inspiring people who through food, have taken a leap of faith, which made a difference in their lives and in the lives of others.

Singapore is a modern metropolis that may seem slightly authoritarian, but if you scrape below the surface, you can find the true grit of the locals. With so many people from so many different cultures, Singapore is truly a diverse place where you can find any type of food, and the opportunity for a better life is available for all.

Ho Chi Minh City, or Saigon as many of the locals call it, is the largest city in Vietnam. The fall of Saigon in 1975 marked the end of the Vietnam war and a victory for the communist north. The country was mostly economically and politically isolated until the government introduced reforms in 1986. Today, Saigon welcomes over eight million visitors per year and has become a city full of opportunities with great restaurants and food scene second to none, which is helping to define its nickname as the Pearl of the Far East.

The Vietnam War forced many Vietnamese families to flee Saigon for other parts of the world. Their children are often referred to as Viet-Kieu, people of Vietnamese descent who grew up outside of Vietnam. David explores the incredible food scene of this dynamic city and meets a few Viet-Kiew who have now returned to their ancestral home, looking for new opportunities that are now available in the new Saigon.

In the 1970’s Cambodia was a blossoming country. Its capital Phnom Penh was often called the Pearl of Southeast Asia and like many countries, ‘Rock n Roll’ had arrived and music was the soul of the nation for the youth. Then one day, the music stopped. Cambodia found itself in

a civil war under the communist Pol Pot Regime. About a third of its population was murdered. Musicians, artists, and the educated were targeted as the Regime perceived them to have western values. Any link to the past was erased. David meets a few locals who through music, dance and the culinary arts are helping to heal a nation and reconnect with its cultural past.

Siem Reap, Art Will Save Cambodia

During the civil war in the 70’s, the brutal Khmer Rouge killed about a third of its population. The dictator Pol Pot declared a new calendar at year zero trying to wipe out Cambodia’s cultural history. Unbelievably, the temples of Angkor Wat withstood the war and today the town of Siem Reap and the temples of Angkor Wat have become a tourist destination and a bustling centre for arts, culture and food. Today, these arts are giving a new generation the tools to navigate their future and a way to reconnect with their past.

Life is complicated. In Bangkok, like in so many big cities, people are busy, working hard and just barely getting by. That’s just how it is. But what if there was another way to live, a simpler way… David meets a few locals who through food and urban planning are champions and activists for a simpler and perhaps a better way of living.

Art in the City

In the land of temples, Thailand is a draw for travellers from around the world who are on a quest for meaning. Years ago, these temples and pagodas were symbols of hope and culture and the pillars of the communities. Over the last two decades many of these small towns and communities were losing their youth to the bright lights and opportunities of the big city. Today, culture and the culinary arts are slowly returning and are offering a new sense of hope in revitalizing towns and villages, which is slowly bringing back its youth.

Bangkok is the capital and the cultural hub of Thailand. Every year tourists from around the world flock to the city to visit its temples, markets, and of course to sample the amazing food – something Bangkok is known for. David meets three generations of women who are contributing to Bangkok’s success, from a Michelin Star street food stall owner, to a seven-year-old climate change activist – Bangkok is full of amazing people making a difference.