There’ll be a treat for everyone this festive season with BBC First.

Period drama fans, bask in the rolling green hills of the Yorkshire Dales and an eclectic cast of farm animals with the Asian premiere of audience-acclaimed All Creatures Great and Small. Watch country vet James Herriot serve a remote, close-knit farming community and build up a family of both humans and animals alike, in the gentlest, friendliest show on TV.

For something a bit more contemporary, Doctor Foster screenwriter Mike Bartlett delivers a wrenching human drama on modern relationships, loneliness and community with Life. Four vastly different roommates share a house, but find their mundane, routine lives overturned by the entrance of unexpected people into their orbit.

John Le Carre’s high-octane espionage thriller The Little Drummer Girl dominates the small screen in grand A-List style. Park Chan-Wook helms this 6-part miniseries in his first-ever TV directorial debut, while Florence Pugh, Alexander Skarsgaard and Michael Shannon electrify as double agents and spy masterminds in their plot to infiltrate a terrorist organization, but find that good and evil aren’t quite as clear-cut as they seem.

It’s Happy Who Year as the Doctor makes her high-stakes return to BBC First! The Revolution of the Daleks Special releases express from the UK on 2 January answers some dramatic cliffhangers from the finale of Season 12, and pits the Thirteenth Doctor and her human friends against the universe’s most enduring foe.

All Creatures Great and Small 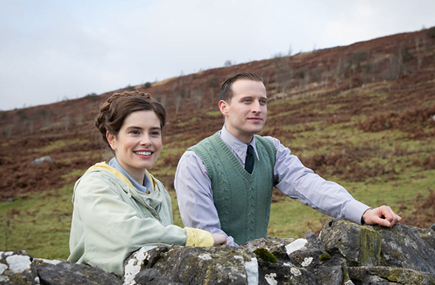 Fresh out of Glasgow Veterinary College, James Herriot (Nicholas Ralph) follows his dream to become a vet in the magnificent Yorkshire Dales. He soon discovers that treating the animals is as much about treating their owners, and the Dales’ farmers are a tough crowd to please. At Skeldale House James gets to know his newly formed dysfunctional family; his chaotic and erratic boss Siegfried Farnon (Samuel West), his wayward brother Tristan (Callum Woodhouse) and the shrewd Mrs Hall (Anna Madeley) who is endlessly steering the ship. When local beauty Helen Alderson (Rachel Shenton) attracts James’ attention he finds another, more enduring reason to stay in the Dales.

More about All Creatures Great and Small:

Set in the 1930s, the show is adapted from real-life veterinary surgeon and author James Herriot’s collection of eight memoirs, telling his whimsical life story of working as a country vet in the remote English countryside. The books come in an episodic format – each chapter contains a short story drawn from Herriot’s own experiences – making them an ideal choice for TV.

The books first received a BBC adaptation in 1978, and have been remade in 2020 for a new generation of animal and period drama enthusiasts. Look out for fan favourites Jess the retriever, Clive the farm bull, Tricki-Woo the dog, and countless cats, horses and cows.

Executive producer Colin Callender says on the show: “It has given audiences a bit of an escape from pandemic and politics… There was something about All Creatures Great and Small with its themes of community and family, harking back to a kinder, gentler world, compared to the divided, complex and rather brutal one that we’re now living in.”

Praise for the show:

The first episode was viewed by 3.3 million viewers in the UK on its initial premiere day, and became the most popular show of all time on its respective channel.

Nicholas Ralph is a Scottish actor, who received his screen debut in All Creatures Great and Small to critical acclaim. He formerly studied at the Royal Conservatoire of Scotland.

Rachel Shenton is an English actress and screenwriter, appearing in the dramas White Gold, Hollyoaks and Switched at Birth across the UK and in America. She won an Academy Award for her short film screenplay The Silent Child in 2018.

Continuing right when Series 1 left off, Tristan has decked the halls with mistletoe and Mrs Hall has laid on a feast and is looking forward to her son Edward returning for Christmas.

As the house fills with locals for the party, James receives a call from Bert Chapman who wants help with his dog who is struggling to give birth. James has to leave the party and is surprised when Helen asks if she can go with him to get away from all the wedding gossip around her upcoming wedding with Hugh.

When it’s time to leave, James is horrified to discover the fog has descended trapping them high up in the Dales until morning.

James calls Skeldale and promises to get Helen back in time for the wedding, meanwhile wondering if he will be able to suppress his true feelings for her.

An explosive series from the team behind BAFTA-winning global hit Doctor Foster. Created by multi-award-winning writer Mike Bartlett, Life explores the human capacity for connection in an increasingly splintered society. Manchester, England. The residents of a large suburban house go about their very different lives. The walls that divide their flats keep them apart. But life has a way of bringing people together. And as their stories begin to intersect, hidden secrets connect these characters in ways that could never have been anticipated.

Life follows some of the characters from the iconic Doctor Foster universe, and tells the intertwining, increasingly complicated everyday stories and moral dilemmas of four unlikely flatmates, who share a house in Manchester:

Mike Bartlett, Writer of Life and Doctor Foster, says about the show: ‘I wanted to write about isolation and its opposite – community. About how we crave being connected to other people but at the same time often end up feeling lonely, or disconnected… It’s called Life because I wanted it to suggest one of those huge Attenborough nature documentaries. By looking at the intimate lives of individual creatures, we learn something about the larger species. Exploring something epic through the tiniest detail.”

Actor Adrian Lester about the show: “Life’s stories are important to tell because they remind us just how much strength ordinary people have when facing everyday, huge problems. It’s always good to go back and remind ourselves just how earth shattering it is just to have a baby, or to lose a loved one.”

Actor Melissa Johns about the show: “How wonderful that we can live so close to people and not have any idea what they’re going through. If we just spent a few moments of our life trying to connect with the person next to us, how much could that open our eyes to what we can see about ourselves?”

A Palestinian assassin is targeting prominent Israelis. An English actress is recruited by the Israelis to infiltrate the assassin’s terrorist cell. This will require all of her acting talents and put her at considerable risk.

More about The Little Drummer Girl:

The Little Drummer Girl is a 6-part standalone miniseries – adapted from the thriller author John le Carre’s espionage novel of the same name – and marks the TV debut of visionary feature-film director Park Chan-Wook (The Handmaiden, The Vengeance Trilogy), as he brings his uniquely arthouse storytelling sensibility to the classic spy genre.

The story revolves around Charlie (Pugh), an idealistic, jobless actress searching for her big break. However, her life rapidly takes a dangerous turn when she meets Gadi Becker (Skarsgaard) on a holiday, who recruits and places her at the very centre of a plot masterminded by Martin Kurtz (Shannon), to infiltrate a terrorist group planning an attack on Europe. Far from the movie screens of her dreams, Charlie becomes a double agent in the ‘Theatre of the Real’, and increasingly struggles to distinguish between love and hate, truth and fiction, and between her divided feelings for both sides. The show addresses themes of factionalism, the ambiguity of war, and shifting morality.

The series was filmed on location in London, Prague, the Parthenon in Athens and the Temple of Poseidon in Greece’s Attican Peninsula.

Director Park Chan-Wook says about the show: “Of le Carré’s many masterpieces, the one I love ahead of any other is The Little Drummer Girl. At the core of this story is an extremely painful, but thrilling, romance. This is what makes the story universal, reaching beyond borders and languages and remaining incredibly current. To adapt such a great work without losing its integrity, it needs the time and depth of a television series.”

Florence Pugh is an English actress, most known for her breakout role in Lady Macbeth, for which she won the BIFA Award for Best Actress. She has also appeared in Midsommar, and as Amy March in Greta Gerwig’s Little Women, picking up an Academy Award nomination for Best Supporting Actress.

Alexander Skarsgaard is a Swedish actor, whose credits include True Blood, Big Little Lies, The Legend of Tarzan, Battleship and The Kill Team.

Michael Shannon is an American actor, producer and director, appearing in such tentpole features as Knives Out, The Shape of Water, Man of Steel, Revolutionary Road and Nocturnal Animals, for which he received an Academy Award nomination for Best Supporting Actor in 2017.

December 1965. Everyone at Nonnatus House is looking forward to traditional Christmas celebrations with all the trimmings, but nothing goes quite according to plan. Sister Monica Joan is rushed to hospital, Trixie is incensed to receive a subscription to a Marriage Bureau as a Christmas gift, and a surprise reunion for Shelagh involves her in a deeply moving birth. Amid all this the circus arrives in Poplar, bringing new friendships, new experiences, and an exciting adventure for Nurse Crane.

More about the show:

Call the Midwife is an award-winning, fan-favourite BBC period drama centring around the lives of a group of midwife colleagues working in London’s East End in the 1950s-60s. Follow newly-qualified midwife Jenny Lee as she joins the team at Nonnatus House, which serves the impoverished Poplar district in the East End and copes with the 80-100 new babies born each month. With this historical backdrop, the show tells stories behind the post-war baby boom, Cold War-era Britain and parenthood, all wrapped up in an empathetic, hopeful family drama.

Call the Midwife has won the TV Choice Awards for Best Family TV for 5 consecutive years from 2016-2020, and has received 3 nominations for Best Drama at the National Television Awards.

Doctor Who: Revolution of the Daleks

With the fate of the Doctor seemingly hanging in the balance following the climactic ending to series 12, Doctor Who will next return to screens for a special during the upcoming festive season, in an episode entitled Revolution Of The Daleks.

A thrilling and emotional festive special featuring major guest stars, and the Doctor’s most iconic and deadly adversaries.

More about the special:

The latest holiday special will see the return of one of the Doctor’s biggest and most feared enemies – the Daleks. Following the events of Season 12, the Doctor is locked away in a high-security alien prison. Isolated, alone, with no hope of escape. Far away, on Earth, her best friends, Yaz, Ryan and Graham have to pick up their lives without her. But it’s not easy. Old habits die hard. Especially when they discover a disturbing plan forming. A plan which involves a Dalek. How can you fight a Dalek, without the Doctor?

Doctor Who showrunner Chris Chibnall promises, ‘There will be Daleks. There will be exterminations. Thrills, laughter, tears. You know. The usual. See you at the end of the year.”

Jodie Whittaker is an English actress who first gained recognition for roles in Attack the Block, Black Mirror, Broadchurch and Adult Life Skills. She is the Thirteenth Doctor in the Doctor Who series, succeeding Peter Capaldi.