New romance drama Lovestruck in the City depicts the real love stories of young people who love fiercely in the city. Starring Ji Chang-wook, Kim Ji-won, Kim Min-seok, So Joo-yeon, Han Ji-eun, and Ryu Gyeong-soo as three separate couples with different dynamics, the main cast and director discussed the series at a press conference today. Find out why you’ll fall in love with Lovestruck in the City below!

The series is directed by Park Shin-woo of It’s Okay to Not Be Okay and Don’t Dare to Dream fame. It’s also written by Jung Hyun-jung who wrote Romance Is a Bonus Book. The main cast is full of popular actors and up-and-coming actors as well. Kim Ji-won and Han Ji-eun both mentioned the director and writer as being a main reason for choosing their roles. Park Shin-woo had praise for each actor and mentioned, “So Joo-yeon is an especially interesting actor. I’m very curious about her future. She’s very lovable.”  He also revealed that he chose Ryu Gyeong-soo through an audition after only a minute or two. There’s much to look forward to with such a solid team!

Lovestruck in the City offers a shorter runtime compared to some other series with 30 minutes per episode. While the episodes are shorter, you can be assured that they won’t be skimping on the story. Director Park Shin-woo said, “Although the run time is shorter, I didn’t feel like it was that different.” Kim Ji-won shared, “Since it’s a shorter drama, I felt like it was more addictive.” She also talked about how time flew by so quickly when she was reading the fun script. You can expect a highly addictive and easy to watch series. 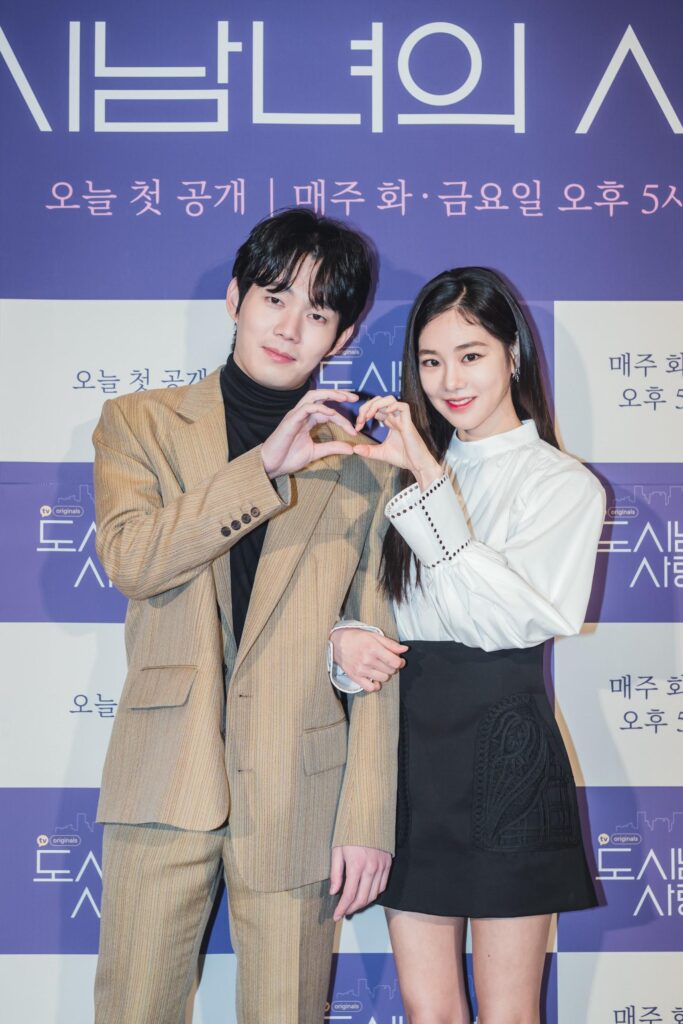 Kim Min-seok spoke about a unique aspect of Lovestruck in the City and divulged, “There are interviews in the drama so it feels almost like a docu-drama. It was really fun and unconventional. I think our drama is very unique.” Park Shin-woo also shared that he took a different approach to directing this series and talked about trying to be more like a variety show director at times. Through the individual interviews, viewers will be able to see how everyone has different perspectives and opinions.

With the premise of the story centering on young people in the city experiencing love, the series aims to be relatable and realistic. Director Park Shin-woo shared, “I hope that viewers can see their relationships, past or present, in the three relationships. I think they’ll be able to find a similar boyfriend amongst these characters as well as themselves amongst the characters.” So Joo-yeon also added, “There were a lot of scenes that were similar to real-life dating, so I could relate while filming with Min-seok.” While the six main characters are all different, you’ll definitely be able to discover relatable aspects.

Lovestruck in the City will be aired every Tuesday and Friday, only on Netflix!